Before anything, what is SaaS?

SaaS stands for Software as a Service.

Basically, data is stored in servers off-site, then users get to access the technology through the Internet. SaaS medical software can use the data on the servers for several functions, namely electronic medical records, practice management system and even health information exchange.

If you’re using SeriousMD, you’re already benefiting from using SaaS. We also take it a lot further with a fully-offline version that syncs automatically when there’s Internet.

The reason for this article is simple. We’ve gotten questions regularly as to why we’re using a subscription model as opposed to a more traditional 1-time payment model or the fully free model.

With this article, I want to answer that question fully.

There are a lot of ways our users benefit from us offering SeriousMD as an SaaS EHR. The clearest one is probably the financial difference it makes, so let’s talk about that right now.

I haven’t even included support fees yet or monthly maintenance costs. They often say these are optional, but are they really? If you’re willing to back up all your data (regularly!) on your own and get no improvements for the software as time goes on, I guess so.

So technically, traditional models still charge monthly if you want them to ensure the software continues to work and follow industry regulations.

How about the other model where the software is totally free? It’s varied but usually, it’s not as strict with rules and requirements, support is close to non-existent, you won’t have backups and you’ll likely be bombarded with ads. Ads are usually how these free EHRs make money. Oh, and most likely, your data will be sold to other companies (not exactly ideal given that medical data is supposed to be private).

A SaaS model has different advantages. I’ll dive into the cons too later in this article, for fairness.

With that out of the way, here are the reasons why doctors will benefit more with a SaaS model rather than the traditional models.

I’ve already given you some insight into this. When it comes to cost, there’s no question why a SaaS model wins.

It eliminates the upfront costs for purchases, installations and upgrades.

Instead of requiring you to pay upfront those large amounts of money just for installation, a SaaS app can be downloaded easily and maintained practically hands-free. Powered with a SaaS medical app, small businesses and new practitioners will have access to high-powered software that might have been only available through conventional methods.

Lastly, as it’s a subscription model, you eliminate the risk of buying expensive software.

Sure, you can probably find and buy a cheap app that you pay for 1 time, I’m sure there are some out there. The problem is, you’re on your own after you enter all that valuable patient data in the app. Don’t expect any support or backups for your data with apps like that.

For doctors, “time is money”. SaaS can save both.

For one, installation is simple (if there’s an offline companion app like SeriousMD) and a quick login is usually all you need to get started. Don’t believe me? Take a look at the first piece in our EHR implementation series: there’s a reason our installation step for SeriousMD is so short.

Next, you won’t have to worry about maintenance or even doing backups. That responsibility falls to the SaaS vendor. Say goodbye to extra hours of doing things yourself and there won’t be any of those days of downtime because the software needs to be updated.

Lastly, unlike traditional software, you’ll spend less time trying to learn a SaaS app. As it’s usually designed with a specific user-base in mind and with the latest technology available to make the best interface, the learning curve is usually shallow. That’s a big time-saver considering that  staff can easily pick it up and integrate the app with your operations. In fact, SaaS apps are generally good at saving you time. That’s just another reason SaaS EHRs are a better idea.

Traditional software needs traditional installation methods. This means somebody has to physically go to your clinic with the hardware and install it.

That takes time and money away from you. If you have multiple locations or even just multiple stations, then the process needs to be repeated because of version compatibility issues, which just means more wasted time.

With SaaS, you just log in and get the latest version or grab the latest update from the App Store. The vendor also covers the cost for upgrading, security, servers and more.

The mere fact that you can access your patient records across multiple clinics is already amazing. You won’t  have to wait until you get to your clinic to see the data and your patient can even visit you in your other clinics.

If you are a physician who gets a lot of patient calls outside the clinic, you will probably find it handy as well.

SaaS apps are especially good for physicians who travel a lot. 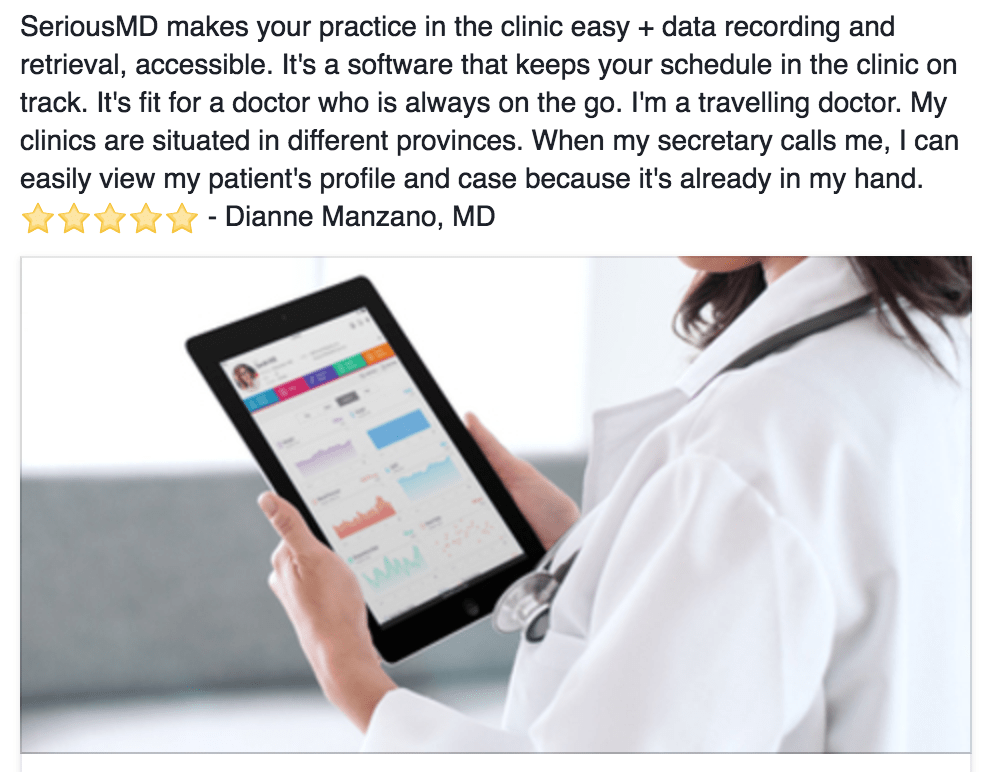 Doctors who travel a lot benefit from sharing EHRs with their staff.

With SeriousMD, you have an iOS app that gives you access to data offline and it will sync once it’s online. If you left your device, you can easily use a browser and access the software from any location.

As your practice grows, you’ll need to get more people on board to help you. Traditional software is usually a pain when it comes to scaling due to restrictions the vendor sets. Through SaaS software, you will have the flexibility to easily integrate more staff or other doctors without losing your mind.

Remember how hard it was to get the latest features for software? It felt like the world just left you behind when you last looked at the software you were using.

Through SaaS apps, you can have access to the latest features barely lifting finger, which brings us to…

If the phrase “painless upgrades” doesn’t explain it enough, then let’s put it this way. Upgrading software is basically automated so you won’t have to do anything but look at the pretty new stuff that helps you be a more productive doctor and grow your practice.

Typically, SaaS vendors will have a community of users who share best practices and tips for using the app. Users also share suggestions and details with the app developer, who can then improve the app while keeping everyone on the same page. Join our Facebook Doctors community!

Traditional software usually charges extra support costs monthly or charge when you need support. For many, there’s barely any support given, they don’t even do updates.

For most SaaS vendors, you will have better access to the support team and in many cases, you can even get time with the founders. This builds trust and a relationship between the company and the users.

I’ve mentioned this earlier but this deserves its own spot.

Why? You probably heard of this story already.

I’ve talked to almost a hundred doctors who had this issue and I’m sure there are thousands more who’ve experienced it out there.

Well, it’s not a problem with SaaS. SaaS apps will handle the backups even in cases like these. You won’t have to worry about doing it on your own.

We all know about HIPAA but here’s a brief summary:

The Health Insurance Portability and Accountability Act of the US mandates, among other things, the establishment of national standards for healthcare transactions carried out electronically. Pertinent to our topic, it includes what is popularly called the “Privacy Rule”, which protects individuals’ health information.

Though HIPAA isn’t really required by law yet in the Philippines, it will be soon enough with the privacy law already in play. But even if you don’t consider the legal side of this for now, there are major dangers to your practice if you don’t pick a good EHR solution.

Let’s take the case of free EHRs. Most of these run on ad-supported revenue. That means they make money through advertisements within the software.

That’s what they usually list as their primary revenue source, at least. What they usually fail to explain is that they have others… including possibly selling raw patient data to other companies.

Think about all the pharmaceutical companies that would love to know your diagnoses and prescriptions for patients. Do you really want your patients thinking you would sell that sort of information — information that can identify them — to third parties who should have no business knowing their medical conditions?

Take the case of a certain famous EHR brand. It’s known for its ad-supported revenue model. Unfortunately, users later discovered it was sending emails to patients requesting provider ratings in the doctors’ names. Most doctors weren’t even aware of the surveying emails until informed by their patients (who naturally thought the doctors themselves had sent the emails).

To paraphrase one doctor’s complaints at this privacy violation, it seems less than ideal when one considers the assurances most physicians have to give their patients when collecting contact info. Physicians often have to assure patients they’ll only use their contact numbers/addresses for emergencies / responses to the patients’ own inquiries, not to send spam.

Of course, there will be limitations when it comes to SaaS software. With anything good, there’s always the other side of the coin. Here’s a quick overview.

For the list of “Cons” — SeriousMD has addressed all of them by having a fully offline app, an affordable when-you-are-ready subscription, and downloadable backups.

And if that’s still not enough, try looking over this awesome infographic from FolderIT about SaaS:

If you’re reading this article, you’re probably already considering SeriousMD or another cloud-based software (hopefully, it’s just SeriousMD :D) but are pondering the costs. There’s something you can do to put things in perspective, though.

Break down the cost to how many days you serve patients in a month. Got the number? It’s likely significantly less than what you pay for most of the things that you don’t even make use of in your practice.

There’s also that chance that you might have invested a lot in your current software. I totally understand that. But even here, you have to do some smart calculation to find out if you really are investing for the future or just wasting more money.

Figure out how much a SaaS/cloud solution could save your practice each month by specifically considering how the old/current interface slows you down and how the lack of certain features hinders you from reaching a proper diagnosis faster and more accurately. Also consider how you keep track of billing. Do you also have trouble tracking claims and balancing out the cash at the end of the day? Lastly, look at planning the data migration (we can help you with that) to move your current data to the new system. How much time and effort would it really cost?

Through this article, I hope you’ve learned that cloud software will almost always provide greater flexibility with a lower cost burden. Couple that with great service and a reliable team behind it then there’s really no need to question why the SaaS model is the only way to go.