Many may begin reading this in a spirit of skepticism. Who can blame them? The case for critics of social media for doctors has its strengths. There is still insufficient scientific data to prove its power in driving referrals, there are unsatisfactory studies to show solid ROI, it is almost impossible to calculate numeric returns from social media marketing, etcetera, etcetera.

Hence the question: with benefits so uncertain, why should an already-pressed-for-time physician still bother with social media?

For one, because the future of social media itself is not uncertain. The networks that make up this part of the online world are still expanding, having leapt from a userbase of 0.97 billion in 2010 to 2.46 billion in 2017. By 2020, the estimate has it reaching 2.95 billion—which means about a third of the globe’s population.

Those are only user numbers. By actual usage hours, we even lead the world (at least, according to 2017 data). Filipinos spend an average of 4 hours and 17 minutes a day on social networks. The closest contenders, Brazilians, spend only 3 hours and 43 minutes a day on it. Americans spend only 2 hours and 6 seconds. 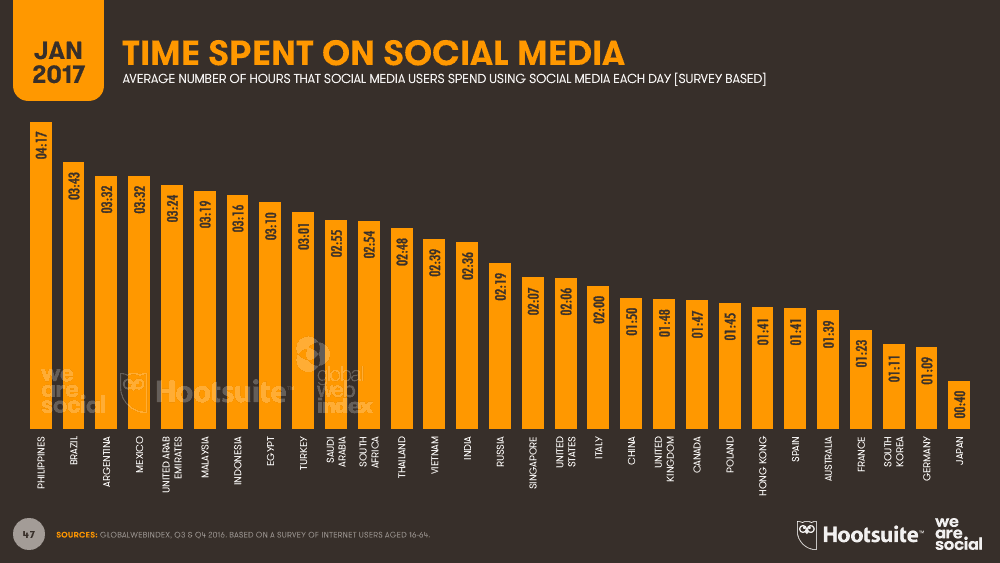 The Digital in 2017 report shows us at the top of social media usage internationally.

All of this indicates that social media is a serious portion of Filipinos’ online worlds. Many of them use it; many of them trust it. And as far as we can see, it looks like even more of them will be using and trusting it in the future.

Any Filipino building an online presence—and that should include most doctors now—would therefore be unwise to ignore its current and potential power.

Posting for Your Practice

Patients can (and, if they happen to be millennials, often do) look you up online nowadays. Your social media accounts will obviously be among the references that show up. Some patients even recommend doctors to others now by sending them links to their doctors’ sites or social media accounts. Depending on what people see, they might be more or less inclined to choosing you as their doctor.

Now the question: How can you build an online trail that leads more patients to your practice using social media?

1. Get on the biggest social media network(s).

If you choose the latter option, Facebook is the best, being by far the most popular social networking site for Filipinos. But then, just about every network has its strengths.

Twitter is brilliant if you need a way to quickly push out short, sweet updates or lead people to other links/information you think can help them. LinkedIn is great if your main concern is with becoming better-established (this may be a goal for younger doctors hoping to be gain credibility).

That may tempt you to create accounts on all of them from the get-go. But remember: having a single, curated social media account is better than having multiple poorly handled ones on different networks. Remember to connect with your colleagues by looking for relevant network groups like these, by the way. This brings us to the next item in the list.

2. Use it to build a positive reputation and relationships within the medical community.

Not every Filipino doctor is on social media yet… and some might even say most of them are not (yet!). But this actually works for you.

The Philippine medical community on the Web is still fairly young as online communities go. At this stage, newcomers can more quickly get to know others and establish themselves as part of “the core” of the community.

Building relationships with fellow physicians is one of the best things you can do to make your practice more visible. We already said it before in our piece on how to get more patients online: referrals represent a significant portion of practices’ business. And like most professionals, doctors tend to refer those they know.

Look at Dr. Philip Tan Gatue’s Twitter follower count, for example. That is a big potential audience… or even patients.

So to make it short: interact. Ask. Exchange knowledge. The idea is to contribute something to the dialogue and thus make yourself a memorable part of the group.

It may help to focus specifically on what may yield the most benefit to everyone, by the way. People will be more attracted to you if you make the conversation more about health/medicine (roughly synonymous with the greater good here) than yourself.

Difficult to put it better than this.

Social media is not your main job, obviously, which means you should not let it take over your days. Yet you still want to invest enough effort into it that it can make a difference.

Now the key to any effective social media strategy is to find a way to organize it. Since you obviously do not want it to take up more time than you can spare, try to schedule it. Set aside a time of day or week for your social media activities.

Some people schedule a weekly block of time for social media management like this.

This makes things a little easier on your followers (they know when to check for your latest content). It also makes it easier for you to remember to do it if it is a regular thing.

Do not get too uptight about it if you miss a day or so between updates, though. There is little point in giving yourself undue stress about “being on time” with posts when they are actually meant to make things better for your practice (eventually) instead of worse.

4. Get into the habit of posting multimedia items.

This is one of the most effective ways of grabbing people’s attention. Most doctors’ social media accounts obviously run on medically informative posts. The most effective ones (in terms of patient engagement and eyeballs) tend to be those with multimedia elements. That means using pictures, sound, or even video where you can.

Look at the more popular doctors on social media and take your cues from them. Dr. Kevin Pho (159K followers on Twitter, 100K+ subscribers on his blog) posts a photo with just about every Tweet he puts out, for example. The same for Dr. Mike Sevilla and Dr. Zubin Damania.

Damania’s Twitter may be interesting for younger doctors & audiences given its “hip” presentation.

Remember that you do have to abide by the basic rules of patient privacy whenever you post, though. Do not post pictures that reveal patients’ faces or identities, at least not sans their signed consent. Do not discuss patients’ conditions with such specifics as might allow others to identify them. This includes replies you might make to people’s messages on your social media accounts, by the way.

In the same vein, make it clear to your patients from the start what your own boundaries are. Most doctors will not want to perform a health consultation online for reasons obvious to them… but not necessarily to their patients.

To avoid issues like that, lay it all out from the get-go: what is fine, what is not, what they can ask you or discuss with you, and where to go for more (your clinic’s formal contact info, for instance).

This should cover your first forays into social media for your practice. We’ll be talking more in the future about this and other ways to make the online world work for you, but for now, you might want to get started by giving us a holler on our own social media accounts (FB / Twitter). We look forward to seeing all of you on the network!