It’s time to figure out the answer to the question: what are the best medical schools in the Philippines by 2017? Naturally, we should start by discussing how we determine “the best”.

The Criteria: What Makes “The Best” The Best?

So how do we tell which are the best medical schools in the Philippines? The standards vary. This is why you will see a fair number of lists of this type with differing entries on the Web: different people tend to use different criteria.

Let us have an example.

Say that our chief indicator of quality is a school’s most recent performance in the physician licensure exam.

To narrow it down even more, let us say we want only schools whose passing rates for all their examinees have been highest this year (more specifically, for the March 2017 exam).

Under this standard, these could be the top 10 medical schools in the country, then: 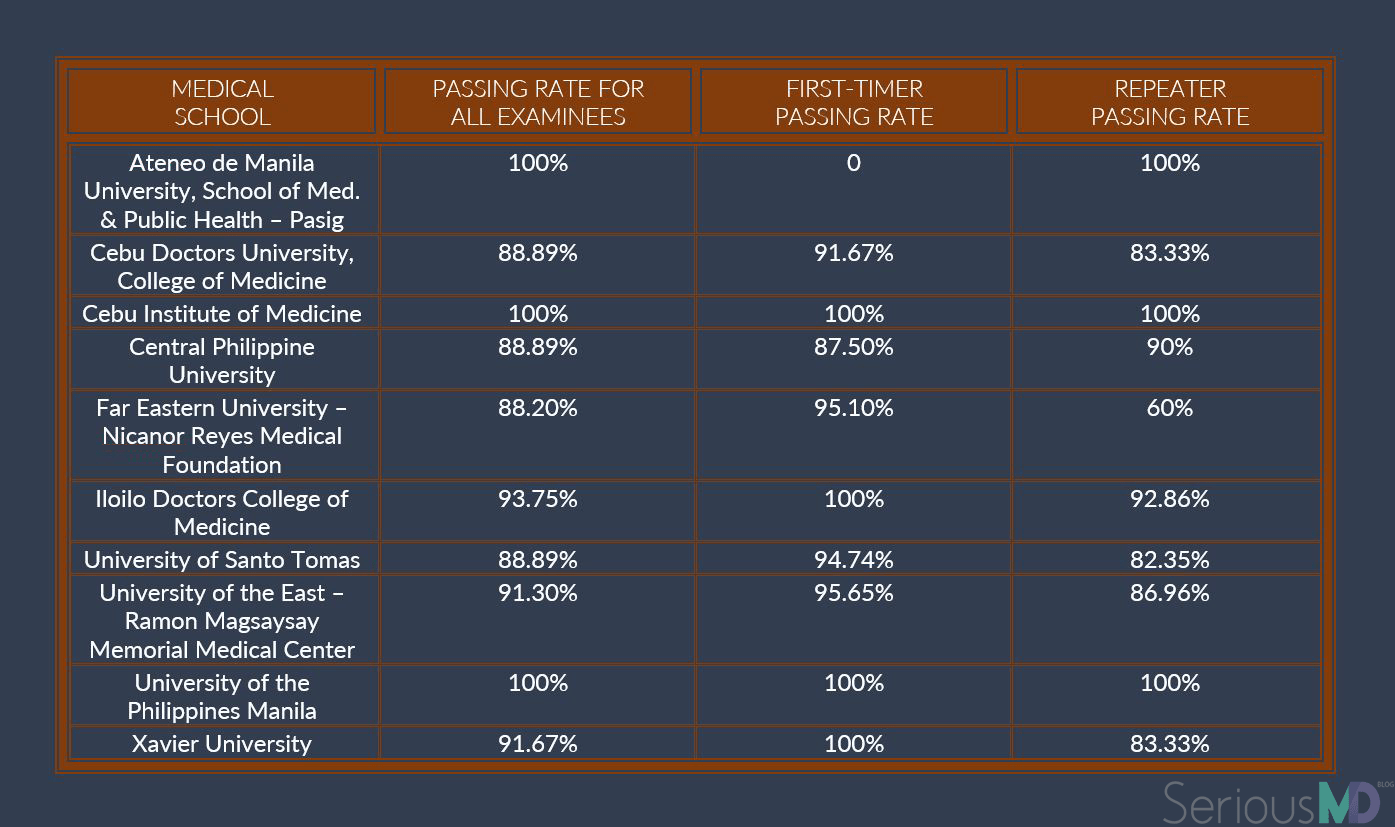 These are all excellent schools, so as standards and lists go, these were not bad choices.

Yet there is an obvious objection: it makes little sense to draw the top 10 from the results of a single exam period.

For instance, Saint Luke’s College of Medicine had only 2 examinees for this set of data. Since 1 passed and the other failed, the school would only have a passing rate of 50%. Not very attractive compared to some other passing rates here… and yet hugely misleading.

Saint Luke’s is widely acknowledged one of the best medical schools in the country. It regularly places among the top-represented schools in the exam’s passers.

In fact, last year (specifically, the September 2016 exam), Saint Luke’s was one of the top-performing schools. It had far more exam-takers too at 75. Along with Pamantasan ng Lungsod ng Maynila (another school not making the March 2017 list above), it had a 100% passing rate.

Now to further extend the example, let us say we want to consider schools based only on their first-timer passing rates, i.e. the passing rates for examinees taking the exam for the first time.

That would knock out Ateneo de Manila’s School of Medicine from the list. Why? Simply since it had no first-timers taking the exam here.

So let us change the criteria.

What if we considered it based on which schools have had the most passers scoring in the top 10 of the year’s examinees, then?

Assuming we were to limit our inquiry to the exam results from the past decade, you would get a slightly different list again:

Another objection: some might argue this new criterion a bit unfair. For instance, UST usually sends the most examinees to the licensure exam each year. From August 2015 to March 2017, for instance, it sent 905 test-takers to the exams.

The only school in the same list to come close to that figure was FEU at 643 examinees. One school in the list (Ateneo’s medical school) did not even begin sending examinees until 2012, being a new institution.

Compared to that, one might say UST naturally had better chances of getting into the Top 10 Passers List each year from 2007-2017. In fact, any school that sends more examinees than the others to the exam would have better chances, numerically speaking.

So how should we determine a school’s inclusion? A more reasonable way to do this, perhaps (at least, if we are still putting this much stock into the licensure exam’s results), is to inspect schools’ performances over a period of time.

One such list that follows this standard came up with a fair roster of candidates for the best medical school in the country (based on first-time test-taker passing rates), and we represent it here.

The Top 10 List of the Best Med. Schools (in the Past 3 Years) in the Country 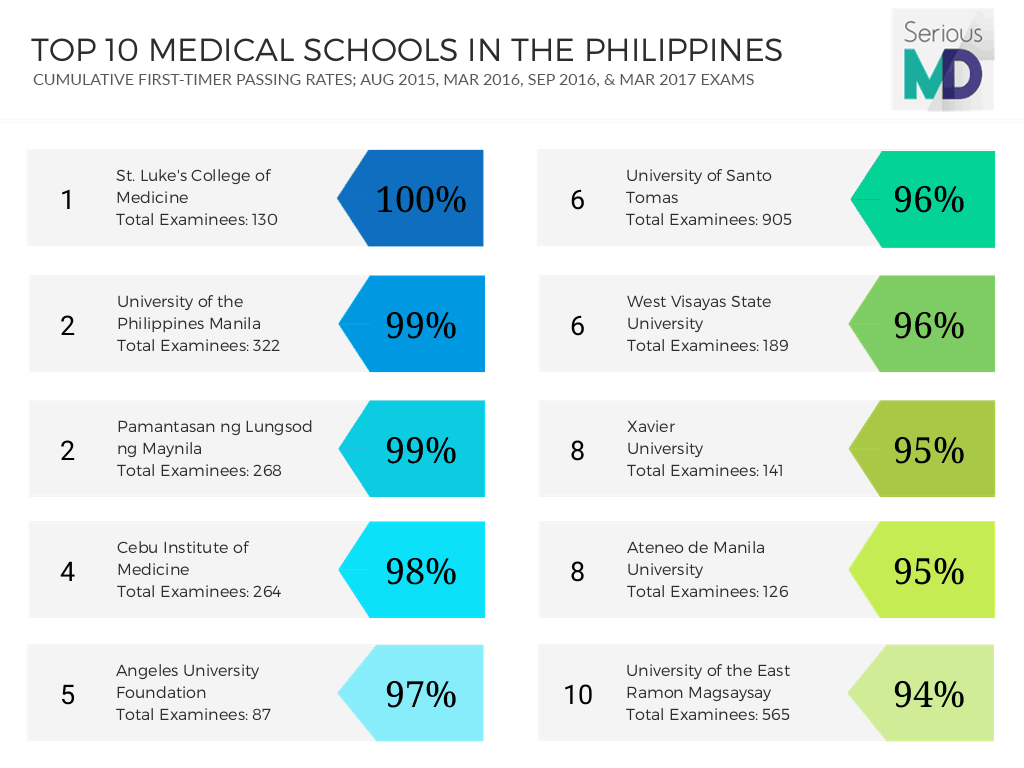 These could be some of the best Philippine medical schools right now.

In addition to these, though, we feel compelled to mention FEU. This is because it was actually the top-performing school in the licensure exams this year (under a standard where only schools with at least 50 examinees and first-timer passing rates over 80% for that year are considered).

Finally, another school worthy of being appended to the list this year is Our Lady of Fatima University – Valenzuela. It had the most examinees in the top 10 passers for 2017: 3 of them, to be exact.

All this having been said, there is still that objection to be acknowledged: school performance in the licensure exam is hardly the be-all and end-all of medical study.

There are perhaps other, just-as-salient indicators of the quality of medical education schools can supply. They may not always be as easily quantified or even compared. That does not mean they matter less.

What do you think? How should medical schools be evaluated in ranked lists like these? What should determine a school’s “grade” in quality?

Or is there a school that you feel deserves to be in the list for a particular reason? A school that should be ranked higher than the others?

Let us know below or on Twitter / Facebook. You can also click on the images of the school rankings above and share how your school did with others on social media. It helps to get discussions like these rolling! You just might help a future doctor figure out which school is right for her/him.

Edit: The table of schools with the most entries in the PLE’s Top 10 from 2007-2017 has been amended for the correct data. The previous set mistakenly used data from a different exam for one of the years, which resulted in incorrect figures for schools like AdMU SMPH Pasig and UST.

18 thoughts on “The 10 Best Medical Schools in the Philippines”