No-shows present a serious problem for medical practices. When patients make appointments and don’t meet them, they don’t just derail your schedule. They also make it impossible for you to deliver the treatment they need and cut into your bottom line.

How does that work out for a clinic in the Philippines? Let’s say for now that each appointment nets you ₱PHP 300 in revenue and you get 13 patients per day.

These are modest figures, but we might as well start with them. No-show rates vary all around the world. Generally speaking, practices will see anywhere from 20-40% no-show rates in their schedules.

That is how no-shows represent potentially millions—if not billions—of pesos lost yearly by healthcare. Even in the US, they cost clinics as much as $150 billion. It’s not hard to see how the costs mount:

But this goes beyond you and that one patient. It even affects your other patients, some of whom might be in greater need of care. Usually, you can’t fill in a no-show’s appointment slot promptly with a replacement. That represents lost hours that could have been spent helping others who require urgent attention.

Fortunately, healthcare professionals and the tech sector are working together to solve this. Medical workers are learning to use—and in some cases, even develop—new tools and practices that can help reduce no-shows.

Efficacy rates vary, of course, and techniques may not be applicable to all clinics. However, implementation may still be the better course than otherwise, as we shall see below.

This list excludes methods such as double-booking or waiting lists for last-minute appointments. This is because those would fall under techniques for mitigating no-show costs, not lowering no-show rates via prevention.

Finally, note that the methods below aren’t necessarily exclusive. Indeed, a fair number of practices use combined systems.

This is one of the most popular methods at present for no-show prevention. This may be due to the following reasons:

The third item is particularly strong in recommending text reminders for Philippine clinics. While not all Filipinos yet know how to use email or bother to check it regularly, many of them do read text messages. A 2017 survey showed that 8 out of 10 check their mobile phones first thing after waking up.

For this reason, we used text messaging as the method for our own study. 15 doctors participated, using text reminders to reduce patient no-show rates. Patients would receive 1 SMS notification the day before their scheduled appointment. In order to be counted in the total appointments completed by the physician for the day, each patient had to be marked in that physician’s queue as “finished”. 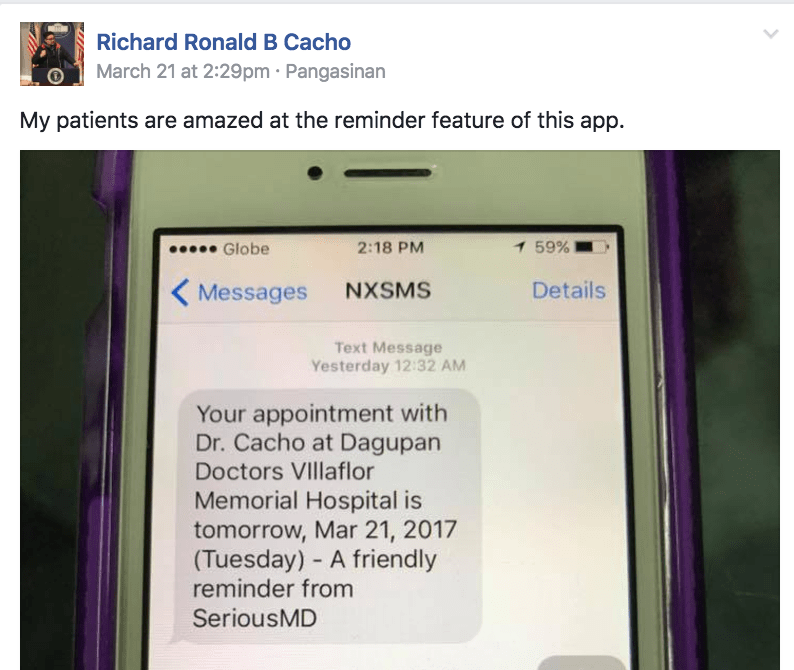 An example of a text reminder sent by the SeriousMD app.

The doctors tested the notification system for 2 months. The control data for the experiment was taken from the 2 months prior to those. The average sample size for both groups was 3,000 patients (for every 2 months), granting an aggregated sample size of 6,000 for the study.

To ensure compliance with data protection laws, all patients also consented to receiving notifications upon registering in the SeriousMD system. All were given a way to opt out of notifications too.

The results showed marked improvements in attendance, as may be seen in the table above. This generally agrees with most of the other studies on text messaging for improving patient attendance.

There are two general types of voice reminders:

Voice reminders bear some similarity to text reminders but require more time and effort to arrange. Text reminder creation can be largely automated. By comparison, most voice reminders have to be created individually. This makes them less desirable as a no-show reduction technique for clinics where staff hours are especially precious.

They may have their virtues, however. Voice notification systems are often seen as very effective. A meta-analysis of relevant studies published in 2016 actually found them better at improving patient attendance when compared to text notices. An older review (from 2011) came to the same conclusion, with manual phone calls showing better results than automated text reminders (39% vs. 29%).

There are hybrid models being developed as well. A 2011 study compared interactive voice response systems to traditional nurse phone calls in reducing nonattendance and ill-preparation. The results showed both methods to be equally effective. 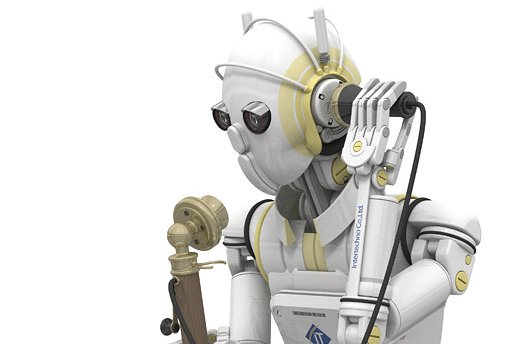 Interactive voice messaging allows prerecorded systems to deliver an almost personal experience for patients… but may cost a lot to put in place.

Interactive voice systems may be a new twist on the voice reminder that could pay off. Still, as they still require more effort to create than their text alternatives, they remain lower on the list of options for most clinics.

Email reminders may technically be the cheapest-to-implement of all the methods in this list. The two negative methods listed later in this list have potential costs associated with them, by comparison. As for text and voice reminders, you typically have to cover their costs in a phone service plan. Email, on the other hand, can be more or less free.

As mentioned earlier, email doesn’t have the same reach SMS does in the Philippines. Still, numbers are improving. The Asia Digital Marketing Yearbook showed that as many as 34% of the population were going online daily by 2012, with the top activity for users being email.

SeriousMD actually has email broadcasts (and SMS broadcasts) too. The cheapness of the medium is a definite consideration for many doctors. The relative ease of use can may be another (copy+paste and typing may be even easier than for SMS, although an option to have recurring reminders is actually built into the SeriousMD system for convenience).

Whether or not email can be effective at averting no-shows is still up in the air. Not a lot of studies have been conducted on it. One rare study did show some promising results, though: in a sample of 73 patients sent emails about their appointments, 22 professed to have known about those appointments only from the emails. This suggests that email can still be a good preventative for no-show patients.

This is one of the punitive methods mentioned before. It refers to the practice of removing patients from your clientele as a response to repetitive no-shows by those patients.

This is not a common method for reducing no-shows. In fact, there are hardly practices in the Philippines that do it. You are more likely to find some overseas, but even there it’s rare.

There are myriad reasons for this. Perhaps the most salient is that most consider it a drastic option. It could have serious consequences for the patient and his health (especially if circumstances make your practice the most easily accessible one for him).

It can even have legal circumstances for you. If you choose to terminate a patient from your roster in the middle of his treatment, for instance, that might ostensibly count as patient abandonment. This means you may well need to have a legally-defensible policy for it ahead of time.

Another thing to consider when terminating patients is the manner in which you carry it out. A very polite and clearly worded letter is generally advisable. Anything less inoffensive (or blatantly emotional) could bring on very serious problems.

An extreme (if overseas) example of the possible trouble less-than-politic patient dismissal can bring on a doctor is in the Gallogly-Stipe incident from 2017. In this incident, a doctor came under investigation as well as public criticism following a flare-up with a patient that was caught on camera.

Of concern too is the possibility that the doctor above may have violated state law in essentially refusing treatment of the patient.

Making patients pay for not showing up is another controversial resort. It is still unusual even in the US, in fact: not even a decade has passed by since Medicare began accepting such penalty payments. Some clinics attribute lowered no-show rates to it, nevertheless: one such practice, charging $50 per penalty, claims to have seen nonattendance down from nearly 200 to 44 per month.

Penalty prices vary. The US’s National Institute of Health claims it to often be around $35 to $50. Numbers are not yet available for the Philippines; we ourselves found no clinics imposing such penalties yet in the country.

Penalties aren’t always applied for each nonattendance either. Some clinics only impose them after two instances of nonattendance for a patient.

More controlled studies comparing more of the techniques to each other are still needed. With what data is available now, however, it would seem that voice notifications and text notifications are the most effective. Both have been shown to reduce no-show incidences in various cases.

Voice reminders tend to post better no-show reduction rates than text reminders. Part of this may be due to most voice notifications still being made manually: patients thus get to interact with a living person in a direct phone call, which signifies greater social and personal investment.

Further, manual voice reminders are often handled by clinic receptionists and secretaries. This makes it feasible for the patients to reschedule appointments during the call itself.

The punitive or negative methods of reduction are actually the most difficult to study. So few clinics use them that reduction rates can’t yet be properly measured.

The problem with this would be the cost of implementation. Not all practices can afford to institute two notification systems in one go. When this is the case, one shall have to do. The choice of which to use shall depend on the practice’s resources again: if sufficient manpower is available for it, voice notifications may be advisable, given their high efficacy when contact is achieved. Otherwise, text notifications are very likely preferable.

As for the punitive methods of no-show reduction, they may well have their place too. But for most practices, it may be best to consider them an absolute last resort. Certain situations may also render them problematic to execute, based on legal strictures.

There are alternatives. For instance, practices might send patients a notice drawing attention to their nonattendance and requesting them to call and cancel appointments in advance instead. Supportive techniques, such as the creation of a list of patients willing to come in for impromptu appointments, might also be of worth.

It may be that practices shall have to take the different methods for a trial to see
which ones work best in their situation. Ideally, you should start with the least intrusive or legally thorny, such as SMS and email. From there you can scale it up to other techniques if you still find these wanting.

What matters is that practices begin taking action now. The sooner they do so, the earlier they can stem the resource bleed that is a consequence of no-shows, and in so doing, take control of their future again.

Want to start stemming the resource bleed from no-shows today? Try using the reminder and broadcast systems on SeriousMD with your patients. You can also download our whitepaper on no-show prevention by clicking the button below.
​