Not too long ago, itinerant physicians had few choices with complex medical equipment. Oh, scalpels, needles, gauze and pills could all be stuffed into a bag. But when it came to bulky monstrosities like ultrasound and EKG machines, medical mobility was challenged.

Now, you can perform an ultrasound right from a patient’s bedside at their home. You can get EKG tests done even while on a bus. Thanks to advances in portable technology, physicians nowadays have their pick of handy devices to bring with them on out-of-clinic visits.

As you might have guessed by now, we at SeriousMD are big believers in mobile medicine. It’s a big part of our dream to make healthcare better and more accessible for Filipinos.

Take the basic portable device we believe just about every mobile doctor should have by now: the iPad / tablet computer. With an iPad, you can use an EHR like SeriousMD to access and even create patient files outside of your office. It’s certainly better than having to bring a physical copy of your files when you go out. You can even scribble on it as you would on paper! 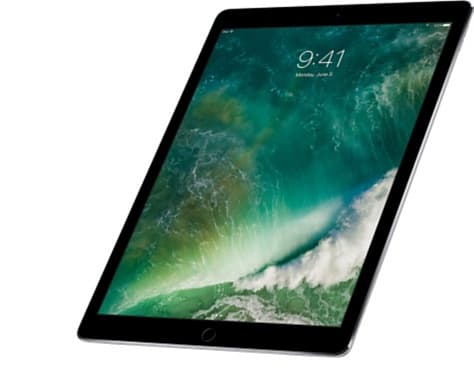 Devices like the iPad Pro make mobile medicine easier than ever before.

Portable tech brings new convenience to an out-of-office doctor’s task. So we encourage doctors to give a try to devices like the 10 we’ve listed below. You just might find something that makes your job as a mobile physician even easier. 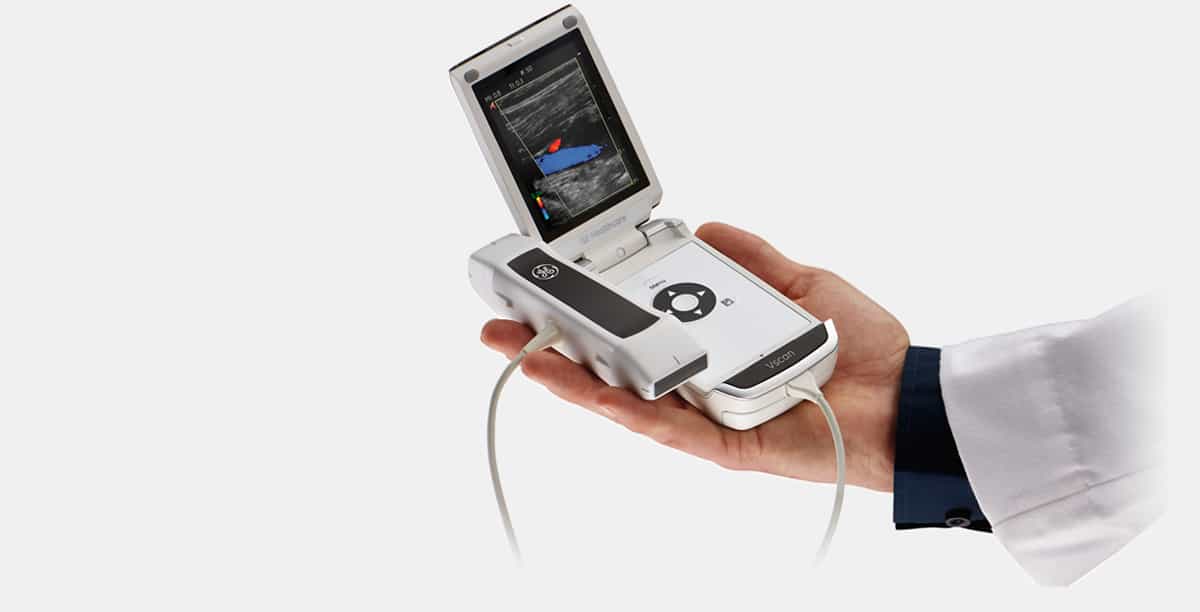 Gadgets like the Vscan let you perform ultrasound imaging on-the-go.

Gone are the days when ultrasound devices took up as much space as a hotel cart. Now, you can actually have one that fits in your pocket.

Consider, for example, the Vscan series of devices from GE Healthcare. Each of the Vscans is about the size of your average smartphone, making portable echoscopy a reality for traveling physicians. The line even boasts a two-transducer (dual probe) model.

The Vscan devices aren’t alone, of course. MobiSante has the SP1 System, for example, which is just about the same size and has much the same capabilities. Whatever the differences between it and the Vscan gadgets, the point is that doctors have more choices than ever before for these sorts of devices now. 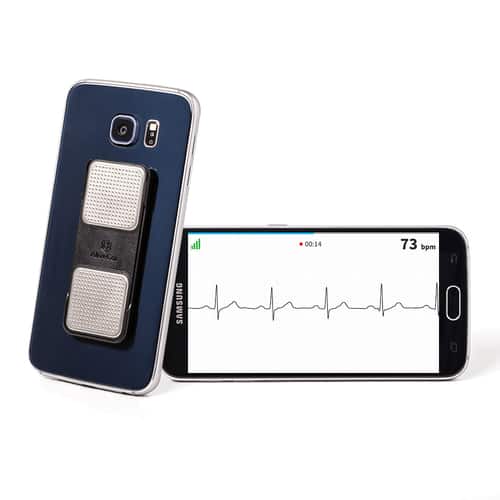 The AliveCor Kardia works with your smartphone as an EKG device.

Arguably the best example is the AliveCor Kardia. Technically, its meant for use by patients who need to monitor their cardiovascular health. There’s no reason a traveling doctor can’t use it for his own consultations, though.

The Kardia Mobile is an FDA-approved device that fits in your pocket and delivers EKG data to your smartphone. All a patient has to do is put his fingers on the Mobile’s pads. If you have the Kardia app on your smartphone, the data should be available for readout in as little as 30 seconds.

There are also smart bandages now that let patients and their physicians keep an eye on their heart rhythms in real-time, by the way. An example is the Vital Connect patch, which uploads patient data to the cloud so that doctors can look out for danger signals. 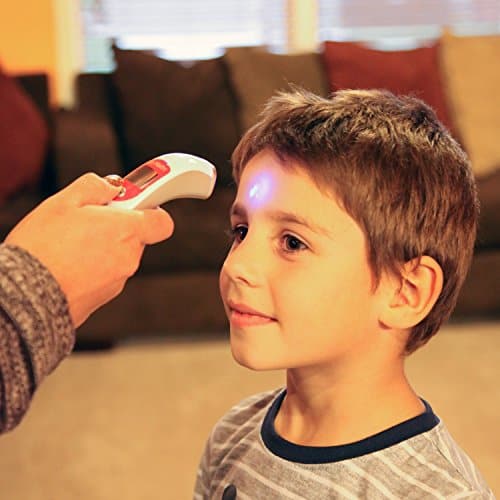 Infrared thermometer in use.

What’s wrong with the traditional mercury thermometers, you might ask? Or even the new ones with digital readouts? Nothing, really, except that they can be a little challenging to use when dealing with patients who won’t stop moving.

Infrared thermometers are probably more useful for doctors in the pediatric specialties. Still, they do offer a nice solution when your patient simply isn’t cooperating… particularly in out-of-clinic settings where the doctor doesn’t have much control over the environment. That means there may be more potential sources of agitation for the patient.

There are a lot of brands offering infrared thermometer models nowadays, so finding one shouldn’t be a problem. A little tip that might come in handy, though: the laser is a marker for the general area where temperature is being measured, not the point being measured itself.

In other words, the actual area of temperature measurement is usually somewhere around the laser—either above, beside, or below it, depending on the gadget in question. Ask the manufacturer of your device to get a precise answer. Otherwise, opt for a two-laser thermometer: this tells you the area of measurement more clearly because it would be the space between the two laser points. 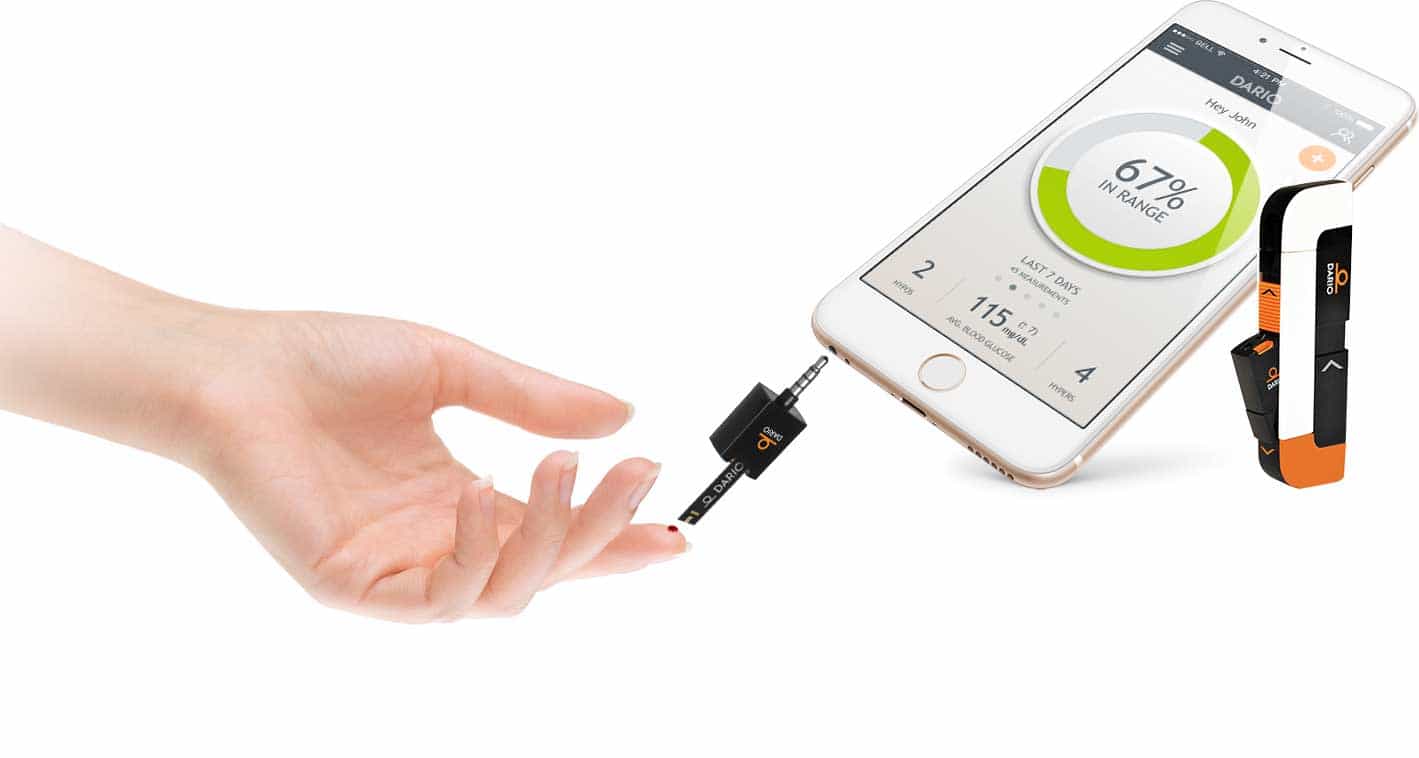 The Dario portable glucose meter being used with a smartphone.

This could come in handy when you need to learn a patient’s blood sugar levels in a flash. While standard hospital glucose meters are smaller than ever these days, there are also options that let you use your smartphone as one. They typically involve installment of an accompanying app and connection of a small device to your smartphone, but the end result is still a more portable system than the average hospital one.

There are a lot of smart glucose meters available nowadays, from iHealth’s Wireless Gluco-Monitoring System to Dario. When choosing one, though, you may want to consider the cost of the strips and having them shipped to your location. 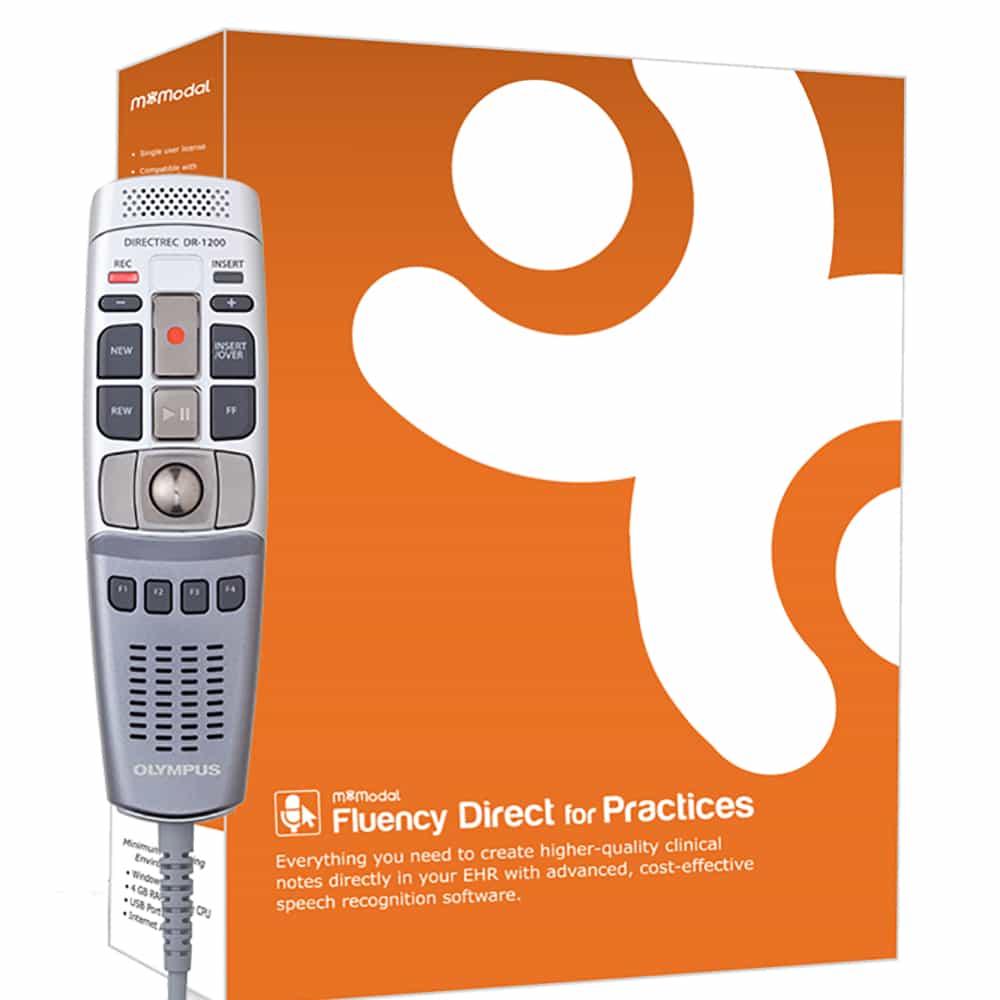 This is for doctors who wear down their fingers with typing or writing down notes after patient examinations. There are any number of speech recognition devices for this purpose now, naturally, but possibly one of the best comes from M*Modal. Their Fluency Direct solution isn’t just tailored to work with EHRs but also sports features like computer-supplied immediate feedback that helps a physician improve his documentation’s quality. 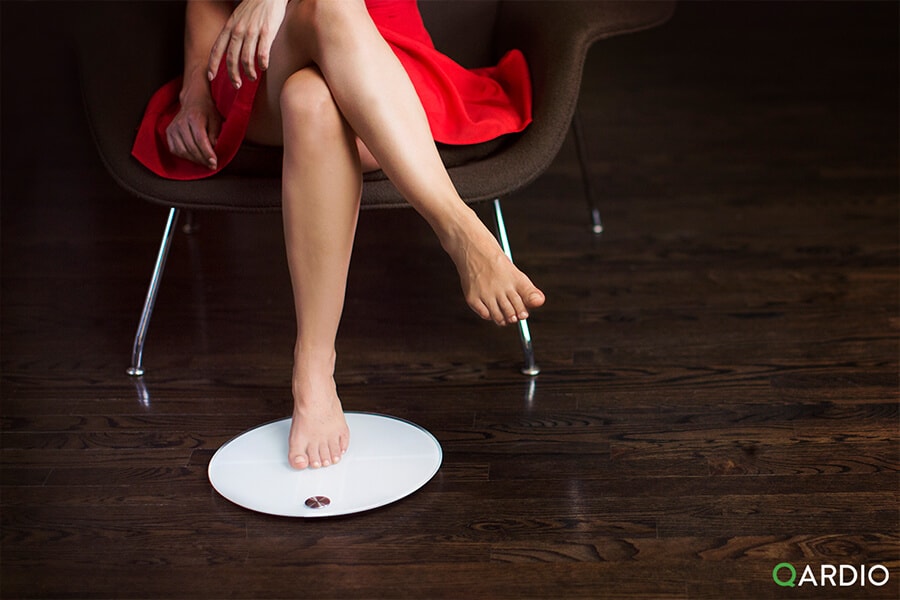 The Qardiobase is a modern scale capable of giving you a lot of information.

You might argue that this is less of a portable device than the others and you’d be right. But if your out-of-clinic-appointments require full checkups, you’ll need a scale in your bag anyway. So, why not go with one as well-rounded as the latest wireless offerings on the market? For example, the QardioBase is a good-looking smart scale that pairs up with an app to deliver a ton of data. Think things like weight, BMI, fat composition, water composition, bone composition, and muscle composition. 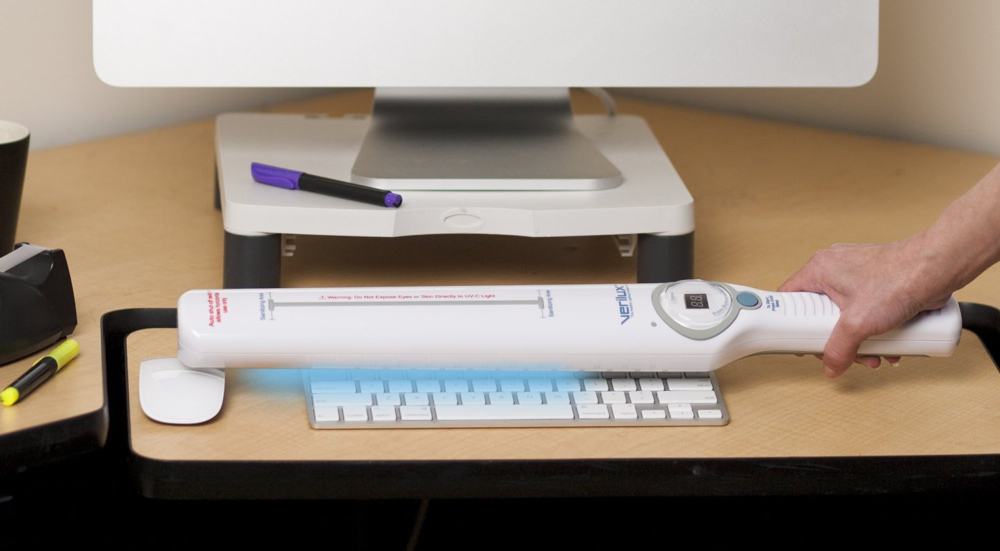 The Verilux sanitizing wand in use.

It might not take the place of your traditional disinfectants (like alcohol), but it could come in handy nevertheless. Sanitizing wands like Verilux’s blast surfaces with UV rays to kill up to 99.9% of bacteria. That makes them pretty good alternatives to liquid disinfectants when you’re working with fabric surfaces and the like. 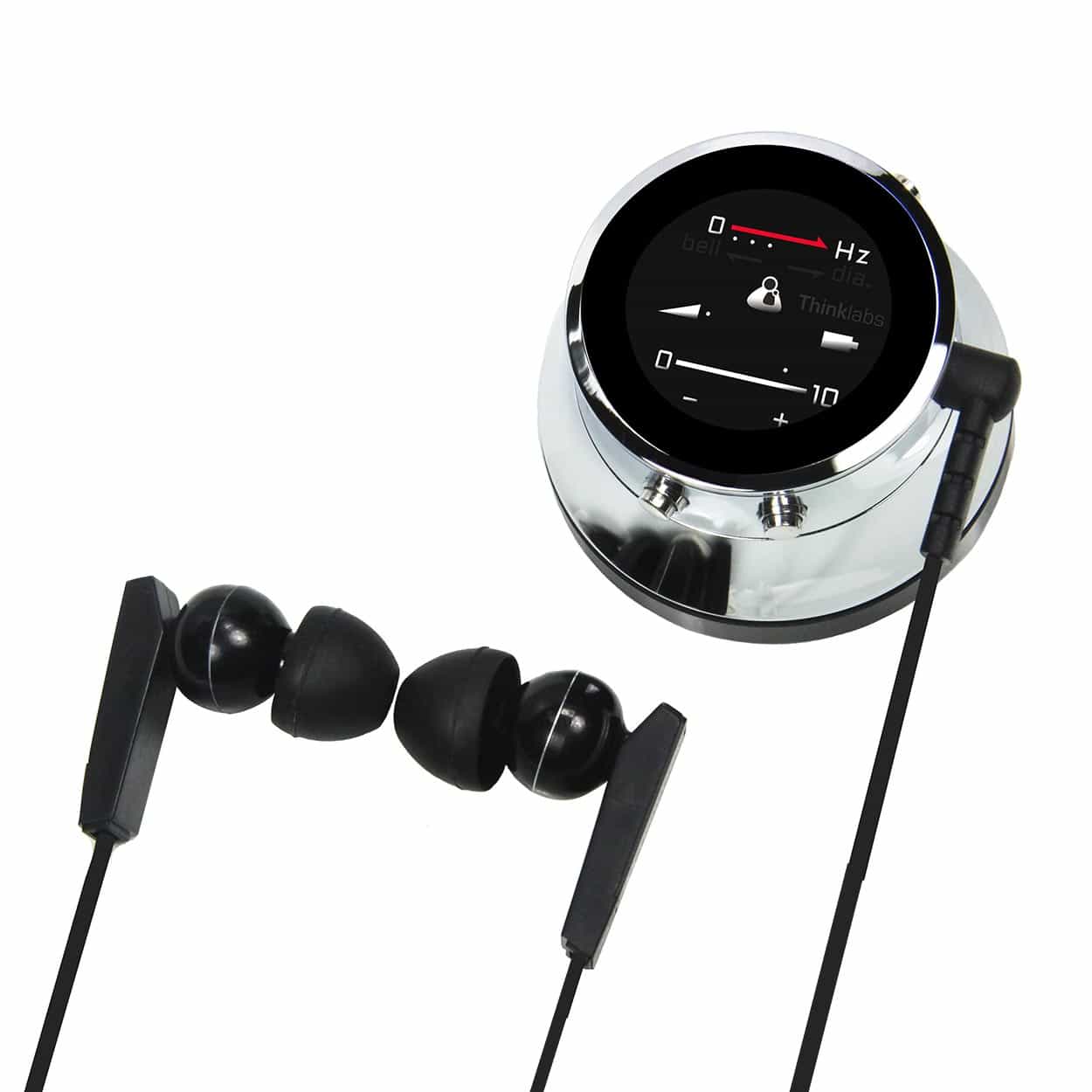 This digital stethoscope comes from ThinkLabs.

Technically, the traditional stethoscope still works just fine… but if you do feel like it’s time for an upgrade, you might consider a digital device instead. Rechargeable devices like the Thinklabs One Digital Stethoscope and the 3M Littmann Electronic Stethoscopes allow you to do things like record patient tracks, send audio data remotely, eliminate the majority of ambient noise, and even use multiple filters. 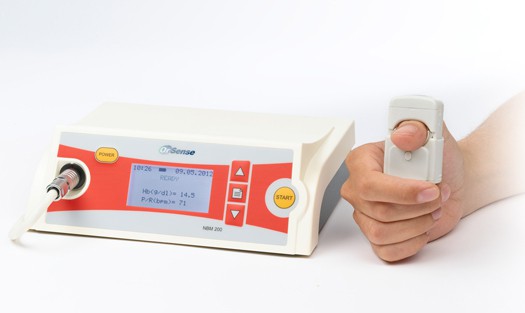 This is the NBM200 blood testing device.

These still won’t be as informative as traditional laboratory tests, but portable gadgets do exist now that let you measure several blood parameters on-the-go. A great example is the NBM 200 series from OrSense. Not only are the systems small enough to pack in your average bag, but they also use non-invasive testing technology to find data including hemoglobin levels, calculated hematocrit, oxygen saturation, low perfusion oximetry, and so on.

Ever wished you had a clearer sense of where all the veins where just under someone’s skin? Here’s the answer for that. The AccuVein AV400 is a gadget that lets you see a real-time map of a patient’s veins on his skin—and can do it with center line accuracy to the width of a human hair. It’s rechargeable, permanently aligned, and weighs less than 10 ounces. It also makes venipuncture easier than ever, potentially saving you time on the job.

And that makes the list of portable devices we think physicians should have this year. Do you think we left out anything vital? Tell us in the comments below! Otherwise, if you want to help other doctors become more mobile in their work, you may want to share this post with them on social media (Twitter / Facebook).