May is Cervical Cancer Awareness Month in the Philippines. The event gets celebrated at other times of the year in other countries, though. In the US, for instance, cervical cancer gets its time in the public awareness limelight in January instead.

Differences in scheduling aside, the focus of all Cervical Cancer Awareness months is more or less the same. They are when we strive to

For example, during Cervical Cancer Awareness Month in the US, interested bodies like the National Cervical Cancer Coalition strive to get more women screened for the illness and vaccinated against it (or more properly, the virus that causes most instances of it).

Such efforts may prove more valuable than ever all around the globe. In our country alone, this disease is the second leading cause of death among cancers afflicting Filipinas. This places it just behind breast cancer in that list—and with 12 women succumbing to it daily as a minimum figure (2010 estimate), one can see why. 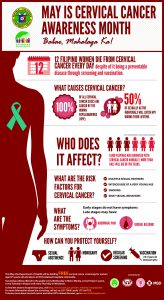 A History of Cervical Cancer Awareness Month in the Philippines

This campaign was created through Proclamation no. 368. Signed by then-President Gloria Macapagal-Arroyo in 2003, the proclamation acknowledged the following points:

The proclamation declared governmental support for the Philippine Obstetrical and Gynecological Society’s (POGS) campaign promoting awareness of the disease.

The campaign has been taking place for over a decade now. It received an additional legislative boost 2 years after Proclamation No. 368: with Administrative Order No. 2005-2006, the Department of Health or DOH formally established on the 10th of February 2005 its cervical cancer screening program.

There have been two main methods of screening used:

The campaign gained a slogan in 2008 with the introduction of the Babae, Mahalaga Ka! partnership between the DOH, POGS, the Society of Gynecologic Oncologists of the Philippines, Merck Sharp and Dohme, and the Philippine Society of Cervical Pathology and Colposcopy. The partnership has also striven to enhance understanding of the risk factors for the disease:

Recent Initiatives, Activities, and How to Get Involved

The program to help women in the country be better informed and prepared for the risk of cervical cancer has seen many activities besides the screening and vaccination already mentioned. Symposiums and talks have been held on the topic by the DOH, for example. There have even been talks produced in cooperation with other countries, such as the Catching Cancer forum, which was held at the EDSA Shangri-la Hotel and in partnership with the Australian Embassy. The Philippine DOH has also done cross-promotions with local celebrities to boost awareness, such as when it launched 2013’s campaign with the help of Binibining Unibersidad participants.

So how can you participate? Start by spreading word about and taking advantage of the resources offered this month. Women can go to any of the designated clinics and hospitals across the nation to get themselves tested. The simplicity of one of the testing processes in particular (VIA) makes it a simple matter to check that you or the women you love are not at risk. Availability of the facilities is constantly improving too: last year, the DOH counted no fewer than 65 hospitals offering the free examinations.

Those acting as guardians to young females (ones aged 9-13 years old) will also want to get HPV vaccinations for them. Each vaccine dose (2 are required) costs a mere PHP600—a paltry cost considering the protection it affords. Those from the poorest areas of the country have a chance to get free vaccinations for their girls, though, as indeed happened in 2015.

You can also keep track of the various talks and events put on by health organizations and the DOH for this month. Try to attend at least one and invite others with you. Bringing even just one friend along to such events could make a difference. Learn all you can about the disease through these events—you can even make an appointment with your doctor to get a more personalized “serving” of information. Armed with that information, you can actually help.

The next step is to get on social media, promote consciousness of the advocacy, and engage others interested in doing the same. In fact, you can get started right here.

Share/tweet this page to others or leave a comment telling us why spreading word about cervical cancer’s risks and prevention matters a lot to you. Get the ball rolling and you could make a genuine difference in the figures. 12 women die of it daily, remember—if we take action now, we can try to get that number down!